This post may contain affiliate links. If you click through and make a purchase, we may receive a commission (at no additional cost to you). As an Amazon Associate, we earn from qualifying purchases. Read our full disclosure here.

Catching your adorable little beagle angel chowing down on a lump of poop is a sure-fire way for them to rapidly go from a 10 to a 0 in your good books!

Although Coprophagia (eating of feces) is extremely common in beagles, it does not make it any easier to deal with as an owner and can have a huge impact on your relationship with them.

If you want to know the real reasons why your beagle eats poop and how you can stop it, then here is all the information you need.

Why Do Beagles Eat Poop?

Beagles eat poop for a whole host of reasons, including boredom, learnt behavior, stress, nutritional deficiencies, attention-seeking, hunger and food obsession, and many more – plus the fact we may make a big song and dance of it!

The truth is, wishing for your beagle to voluntarily stop eating poop is an impossible feat, as they have all the characteristics that make them incredibly susceptible to eating their own and other animal’s poop.

As beagle owners, we need to get creative and deny them the opportunity to pick up the poop in the first place!

Facts About Dogs That Eat Poop

So now that we know how common coprophagia is in dogs, let’s look at some of the most likely reasons why beagles eat poop.

Beagles that are nursing will have a natural instinct to keep their pups safe from predators by clearing up all of their poop. This removes the scent that makes it easier for them to be detected and located.

2. Learnt Behavior From Their Mother

As the beagle pups watch their mother clearing up after them, they learn that this is normal behavior and may continue eating poop into their adult life.

3. Learnt Behaviour From You

This is a fairly tricky one to balance, but when you go straight out to collect their poop, beagles may think there is some value in ‘this stuff’ that you are so eager to pick up.

For hundreds of years, beagles were bred as hunting dogs. Their instinct to constantly be on the lookout for food meant they would scavenge for whatever they could get their paws on. If it looks like food, then it’s game on!

The beagle breed is commonly crated, which means that as puppies they are also likely to be caught short and poop in their ‘little home.’

They may eat their poop to remove it from being in such close proximity to themselves and their rest area.

Read our Beagle Puppy Crate Training Guide and Crate Training Do’s and Don’ts for further information on how to prevent potty accidents in their crate.

It’s no surprise that we may yell, gasp or wave our arms about trying to get their attention when they are caught eating poop.

This could seem like a fun game to beagles, who may then carry on with this attention-seeking behavior with the full knowledge that it will elicit a reaction from their owners.

Some believe that beagles may eat their own poop to hide evidence of their ‘bad behavior’ for the fear of being punished by their owners for pooping indoors. Whilst separation anxiety can be a cause of poop eating, there is little information to support this theory.

When beagles are fed outdoors within close proximity to where they usually have a poop, they could associate the smell of the poop with that of real food.

As humans we clearly find the idea of poop eating repulsive, but this is not the case with beagles! Dogs eat food based on fueling their bodies, and if it seems like fuel, then it smells great to them!

The beagle breed is prone to boredom just like many other dogs and needs a fair amount of physical and mental stimulation. A lack of this can ultimately lead to them investigating and eating their own poop – similar to inquisitive babies that put everything in their mouths!

Beagles can suffer from stress and anxiety just like humans, whether this is through a chaotic environment, being confined, separation anxiety, or other situation that they find overwhelming. This can lead to unusual or unexpected behavior, including the eating of feces.

When dogs are fed on a diet containing filler foods such as corn, soy, husks, and wheat they will get hungrier far quicker than if fed a superior alternative.

These filler foods only aim to fill a dog’s belly and rarely provide any great deal of nutritional value, leading to dogs hunting for food elsewhere.

Dogs have a short digestive tract which means that they process their food very quickly. So a nice, fresh poop may still have some nutritional value according to your beagle, making them believe it is a healthy snack!

READ: The No.1 Recall Treats for Beagles!

Can a Beagle Get Sick from Eating Poop

If a beagle is eating its own poop then this will not cause any harm. It could reinfect them with parasites, but these are already in their system. At most, it may cause a slightly upset tummy with some horrendously gassy and smelly farts.

However, if your beagle is eating another animal’s poop it could develop a parasitic infection. If this happens, keep an eye out over the coming days to watch for any signs of illness and seek immediate advice from your vet.

Signs of a possible infection can include:

8 Ways to Stop Your Beagle From Eating Poop

Stopping your beagle from eating poop requires preventative and proactive measures on your part. It is one of the most challenging things to train out of a stubborn beagle, but you can have success with the following:

The single most effective way to stop your beagle from eating its own poop is to clean it up as soon as possible. Having a backyard full of dog feces is a great way to give them the opportunity to feast!

When your beagle is about to have a poop, wait at the back door with a jar full of treats at the ready. As soon as they have done their business, rattle the jar to entice them back, then close the door and leave them in the house with a treat whilst you pick up the poop.

Having them trot back with you whilst you collect the poop may signal to them that there is something interesting and exciting about their poop.

Beagles may be forgiven for thinking their names are actually ‘NOOOO’ as this is used more than any other word around them!

But you need a command word that they immediately respond to in order to indicate that they should stop whatever they are doing (for safety and behavioral reasons).

Whether this is No, Leave It or Drop It – it’s important that they understand what this means.

Keep an eye on beagles during off-leash walks and when they approach any poop, use your command word with a short, sharp, and loud tone so they know what they need to do.

They may eventually decide that there is no point in even trying with ‘hawk eye’ watching over them!

Beagles are clever hounds and expert opportunists, if they know you are distracted they are more likely to pick up a piece of poop!

5. Walk Them on The Leash

If you believe that there is no way you can let your beagle roam free whilst ensuring that they avoid poop eating, then it may be best to walk them on the leash.

Many beagle owners avoid walking their dogs altogether due to the stress or embarrassment of their poop eating habits, but this is a perfectly good alternative.

Whether it’s puppies or adult beagles, the best way to prevent them from pooping in their crate is to ensure that they have had a decent amount of physical exercise before they are settled in their crate for an extended period of time.

This will give them the opportunity to have a poop somewhere that they are supposed to, as opposed to in their rest area.

Feeding your beagle a nutritious diet is one way to eliminate this as a potential cause of poop eating. Ensuring that your beagle gets good, wholesome food may help prevent them from seeking nutritional value elsewhere and will keep them fuller for longer.

Many beagle owners resort to using additives in their food in the hope that these may work to stop their beagle from eating poop. Most people do not have any great deal of success with these, but some of the more common methods include:

Meat tenderizer contains papain, a protein-digesting enzyme from the papaya fruit. It may help with the absorption of nutrients, reducing the urge to seek other food sources. It is also believed to cause stools to taste bad, acting as a deterrent.

Pineapple is widely believed to make dog poop taste bad, added to their diet in the hope that this will put a beagle off from eating their own poop. Most owners have tried this method without much success.

Things That You Should Avoid

The use of a muzzle may seem like a great idea, and generally, it will stop a beagle from fully eating a pile of poop.

The reality is that if you don’t address the underlying behavior, your beagle will still attempt to pick it up, and cleaning a poopy muzzle is no fun at all!

There is no real evidence to show that punishing your beagle for eating poop will help stop them from future attempts.

It can also cause other issues such as your beagle hanging on to their poop or avoiding going to the toilet as they fear the act of pooping rather than the act of eating it.

One thing punishment is sure to do is ruin your relationship with them!

Many owners state that they immediately give their beagles a treat or dental chew to help clean out their mouths straight after they have eaten poop.

This can reinforce to your beagle that poop eating guarantees a reward, therefore associating this with good behavior.

How to Clean a Beagles Mouth After They’ve Eaten Poop

Once your beagle has eaten poop you will rightly not want them roaming around the home freely, licking children, drooling on the floor, and contaminating soft furnishings.

The best way to deal with cleaning is to have a beagle grooming kit readily available.

Use a wet cloth to wipe away any traces left around their mouth and jowls. Using a dog-specific toothpaste and fingerbrush, reach around their teeth and gums and gently brush. (Do not use toothpaste made for humans as this can be harmful to dogs). 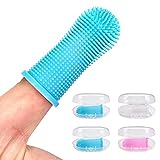 Only once some time has passed and they no longer have any association with eating poop, give them a dental chew. This will produce saliva when eating and naturally clean their mouths and teeth.

Always have a fresh bowl of water available and once they have taken their first drink, wash the bowl and refill with water again.

Discovering that your beagle eats poop can come as a shock and for most owners, it doesn’t get much easier to deal with.

Although training your beagle to stop eating poop is a huge challenge, there are many things you can do to eliminate or reduce the chances of it happening every time. It just means you have to be more stubborn than they are! 13 Ways to Beagle-Proof Your Home and Yard (Pro Tips!) 350 Weird, Wacky, and Wonderful Names for a Beagle