Inflatable Collars for Beagles: How Effective Are They? This post may contain affiliate links. If you click through and make a purchase, we may receive a commission (at no additional cost to you). As an Amazon Associate, we earn from qualifying purchases. Learn more about disclosures.

Does your beagle need the cone of shame? Whether for surgery, minor injuries, or to prevent excessive scratching or licking from skin conditions, making sure your pup is comfortable whilst healing is a top priority.

Inflatable collars for beagles are far more effective than traditional plastic cones. However, there are some key considerations in order to get the most out of them.

If you’ve previously tried them without success, don’t give up!

This article will tell you everything you need to know, including how the type and size of the inflatable collar make a huge difference to how well it works, including one crucial thing most dog owners forget to do with them!

Do Inflatable Collars Work for Beagles?

Yes, inflatable collars are perfectly fine for beagles, despite the breed having a reputation for being a little destructive. A good quality inflatable collar that fits correctly shouldn’t be accessible to your beagle’s mouth, therefore making chewing highly unlikely.

Our beagle suffers from regular hot spots, so we are frequent users of inflatable collars and know an awful lot about what makes them suitable for the beagle breed.

Having tried and tested so many varieties over the years, we now know exactly what type of inflatable collar is needed for complete effectiveness (and ultimate comfort), and believe that it is an essential item that every beagle should have handy.

READ: Beagles – The Realities of What to Expect!

Why are Inflatable Collars so Effective?

Clinical studies have shown that stress makes it more challenging for your dog to heal, and wearing an uncomfortable, rigid ‘cone of shame’ can be highly distressing for them.

Inflatable collars are like big cushions or neck pillows, providing far superior comfort than the vet-issued plastic cones. They immobilize a dog’s neck to prevent them from scratching or licking wounds on their body.

If your beagle has the opportunity, it will continue to lick and scratch any irritations – making the healing process an extremely difficult one.

Inflatable Collar vs Cone of Shame

Inflatable collars are a fantastic alternative to plastic cones. They have the same purpose of preventing excessive licking or biting, but they allow more freedom and mobility for your dog.

There are some notable differences between an inflatable collar and the traditional cone of shame:

Inflatable collars allow your dog to move around as they normally would, and once they are used to it, they should provide no resistance to wearing them.

It provides so much freedom to move around that you can still enjoy playing games with your beagle without removing the collar.

Eating and Drinking with Ease

Eating and drinking is a doddle whilst wearing an inflatable collar, and your beagle will be able to reach floor level without any difficulty.

The cone of shame completely prevents this and it will need to be removed every time they need access to their bowl, which increases the risk of your pooch scratching at wounds before you can stop them!

Does not Block their Vision

Beagles, just like any other dog breed, do not enjoy a lack of peripheral vision. Although the plastic cone is mildly see-through it still blocks their vision, particularly when any light may be reflecting from it.

This one doesn’t need an awful lot of explaining.

All you have to do is imagine what it would feel like for you to sleep in a plastic cone, versus a nice soft neck pillow! If your pooch is irritated throughout the night, they will put up more resistance to wearing it.

When inflatable collars are fitted correctly, they provide a safe and effective way to prevent your beagle from reaching their wounds.

Although plastic cones are designed to also prevent this, they have been known to cause injuries to dogs, including cuts from bumping into walls/furniture, falling down the stairs, and psychological distress.

One big reason why beagles kick-off when wearing the plastic cone is down to the lack of comfort.

Some have been known to repeatedly run into walls in an effort to break them off and escape them. However, most are likely to sit and sulk by barking or howling it out.

Their reaction to inflatable collars is completely different, so long as it fits as it should. Our beagle took to the inflatable collar with very few issues initially, and you’d be led to believe she actually quite enjoys it now!

Important: Use them with a Regular Dog Collar

One very important aspect of using any inflatable collar is that it only works when used with a regular dog collar inside the straps.

The regular dog collar keeps the inflatable secure in place, and it won’t be long before your pup realizes that they won’t be able to pull it off!

What Size Inflatable Collar is Right for a Beagle?

With most of the inflatable collars available on Amazon at the moment, a large size is the only option for beagles. However, the large is a little too big and the medium is way too small! The difference between the two sizes is quite amusing!

There is definitely a lack of suitability when it comes to the right size inflatable collars for medium-sized dogs such as the beagle.

Inflatable collars should be big enough to stop your beagle from reaching its paws or scratching at its jaw, but snug enough that they cannot be pulled off. After having tried several different sizes from a variety of brands, we were still waiting to find the right one.

The main issue we had with the large collars is that the hook and loop (Velcro-type) straps do not allow you to tighten the collar to its full potential, leaving a gap on either end where our beagle could gain access to her paws.

Whilst still on our quest to find the perfect size and type of inflatable collar for our beagle, we came across Dirty Little Paws.

We must say, we’re a little obsessive when it comes to seeking out the best products for our beagles, and we don’t stop until we find them.

Having browsed through all of the available collars online, we found Dirty Little Paws on Amazon – a cheeky take on your usual dull gray or blue inflatable collar.

Their sprinkly donut designs caught our attention and the buyer reviews were all very cheerful and clearly happy with the product.

We contacted Dirty Little Paws and they kindly sent us some sample products to put to the test, and here’s what we found:

The first thing you notice when you take the inflatable collar out of the pack is the fabric…it’s oh so velvety soft – just like beagle ears! The stitching is far better quality than the cheaper ones we’ve used previously, which normally fall apart after repeated use.

The Perfect Size for Beagles

We were so happy to find that the medium size inflatable was just right for our beagle who has an 18inch / 45cm neck diameter. The large size was also usable thanks to the adjustable strap and clip which makes a huge difference when fitting the inflatable.

Yes, we really did say that!

The Dirty Little Paws inflatable collar provides a wider girth around the donut, which makes it more difficult for beagles to reach their paws.

Beagles have slightly longer rear legs, so when they are sitting up they can still manage to reach them (with the other types of collars on). Not with a DLP donut though!

Most of the inflatable collars on the market will use a cheaper strap to tighten or loosen the collar. Whilst initially this did not seem like too much of a problem, it does get clogged full of hair and other debris and will stop being effective.

The hook and loop part of the straps were also too short, being ineffective at completely closing the gap.

The adjustable strap and clip mean that even with a large donut you can fully tighten the straps, leaving no gaps for your beagle to get through. If limiting access to their paws is a priority – then this fixes all problems!

Up until we received our DLP inflatable collars, it was fairly normal to wake up in the morning to a half-deflated donut hanging around our beagle’s neck. When the donut deflates (even slightly) it will become ineffective, allowing dogs to lick, bite or scratch body parts.

Both donuts received from Dirty Little Paws managed to remain fully inflatable for at least 24 hours, only requiring one additional brief top-up after two days of use.

One really annoying thing we found with the cheaper collars was that the usual gray or blue ones used become filthy fairly quickly, especially when used on a beagle.

Hair, slobber and endless rolling around on grass quickly take their toll, requiring regular washing to bring them back to a presentable level.

The design and color of the DLP donuts cover up an awful lot of these stains and stay looking fresh for much longer.

Our beagle suffers from hot spots regularly in warmer months, requiring frequent use of inflatable collars. This may only be two or three days at a time, which means that the collar gets washed and packed away often.

The seams of the DLP collar have shown no signs of failing, even after 10 washes.

We would suggest a couple of important things when looking for an effective inflatable collar:

This will ensure that you can wash and use the inflatable collar several times over without needing to replace it, as you do with hook and loop straps. It also means that you can tighten the larger collar and eliminate the gap where beagles can slip their mouth through.

Getting the Right Size

Too small and it’s going to be a tight, uncomfortable fit.

Too big and they can end up pushing the front of the collar up, creating a halo effect above their head and rendering the collar useless. When this happens, their mouth will have access to their paws and their paws to their face!

Where can you Buy Inflatable Collars?

Looking for an inflatable collar online is easy and Amazon is usually the first port of call for most of us.

Prices start at around $10 for cheaper collars with hook and loop straps, however, we would highly recommend spending a little more on greater quality that will last at least 10 times longer.

You can find DLP donuts at Amazon, alternatively, there are very similar products which share the exact same qualities and features as these. As with anything, gift your pooch the best comfort money can buy!

Inflatable Collars are Effective for Beagles

Although beagles are known for being great escape artists, there are effective ways to ensure that they don’t slip an inflatable collar.

Once you have the right type and size, finding the perfect inflatable collars for beagles becomes a doddle.

Did you find this post useful? If so, sign up for our weekly newsletter to receive fun facts, useful guides, beagle-proof product ideas, and more! How Long Do Beagles Live? (& How to Increase their Lifespan!) 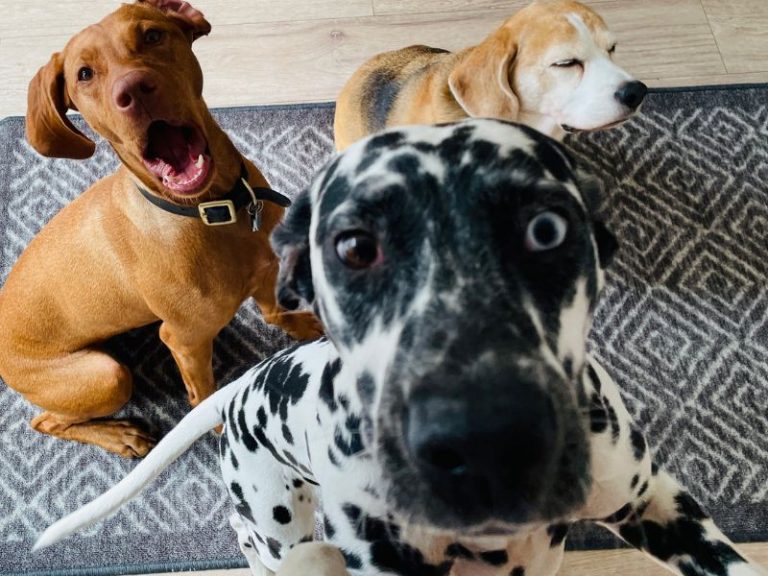 We have owned and cared for many beagles over the years, and understand how challenging it can be to find reliable information when you need it the most. At The Barmy Beagle, we create original content through writers with personal experiences, to ensure you have authentic information at your fingertips, making life as a new or existing beagle owner a little bit easier, and far more enjoyable.